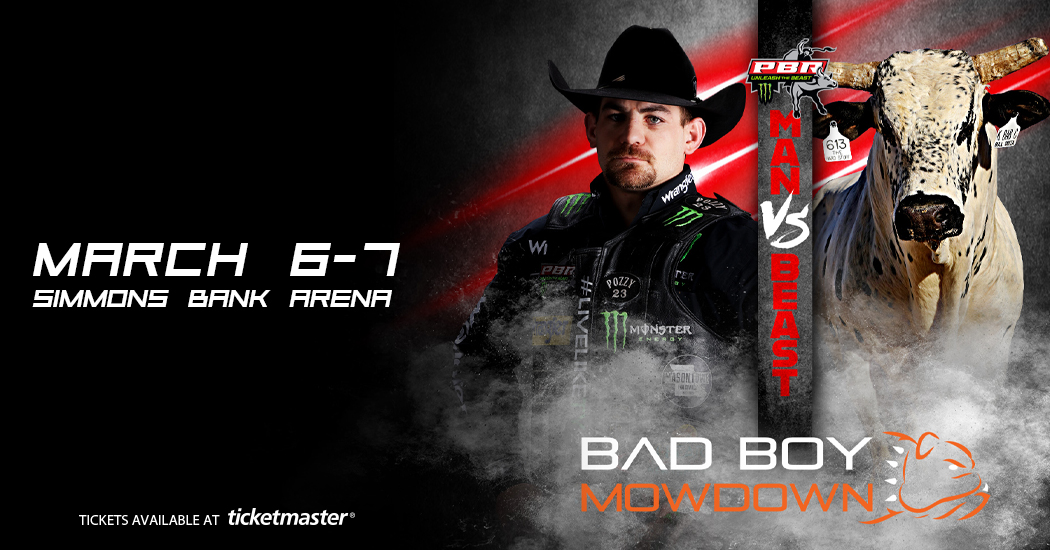 NORTH LITTLE ROCK, Arkansas – As the 2020 PBR (Professional Bull Riders) season is heating up, MBR (Miniature Bull Riders) is bringing the future stars of the PBR to North Little Rock, Arkansas, along with the elite Unleash The Beast tour’s 2020 Bad Boy Mowdown at Simmons Bank Arena. On March 6-7 North Little Rock will host the world’s top bull riders, big and small. The event will also serve as the last chance for Arkansans to see the 2017 PBR World Finals Champion Ryan Dirteater (Hulbert, Oklahoma), who has announced that 2020 will be his last season.

Tickets for the two-day event are on sale now and start at $14. They can be purchased online at PBRtix.com, at the Simmons Bank Arena Box Office or at Ticketmaster.com.

Attendees of past editions of the Bad Boy Mowdown have experienced legendary PBR  moments, like J.B. Mauney (Statesville, North Carolina) in 2019 tying two-time World Champion Justin McBride for most premier series wins and for second-most 90-point rides. Now fans also get a chance to see the next set of legends as the competitors from MBR take the dirt next to the big guns.

With the unveiling of a new generation of greats comes the farewell tour of one of the most consistent riders over the last decade, Ryan Dirteater. The Oklahoma cowboy has amassed more than $1,689,000 in winnings across all tours, and a career best seventh-place finish in Little Rock in 2017. Along with adding to 18 90-point rides and 18 event wins in his career, Dirteater will attempt to hoist his first buckle in the Natural State during his final season.

For an enhanced PBR experience, fans can now purchase PBR Elite Seats and Premium Experiences, which provide a behind-the-chutes look into the toughest sport on dirt.

Premium options include: early entry, tickets to a premium seating section, a catered reception, a pre-event backstage tour by a PBR host that features a PBR 101 presentation and visit with the sport’s fiercest bovine athletes, and the opportunity for autographs and photos from the sport’s top stars. After the event, ticketholders will also be given premium dirt access, where they can get their complimentary 2020 PBR program, Elite Seat lanyard and other memorabilia autographed by the Top 35 bull riders in the world.

For more information on the upgraded experiences that are offered, fans can contact PBR Direct at 800-732-1727.

The 2020 PBR UTB season consists of 26 stops, bringing the toughest athletes on planet earth to cities such as Kansas City, St. Louis, New York City, Los Angeles and many more. The season culminates with the PBR World Finals at Las Vegas’ T-Mobile Arena November 4-8. In the Entertainment Capital of the World, the 2020 PBR World Champion – the bull rider who earns the most world standings points during the -season – will receive the coveted gold World Championship belt buckle and a $1 million bonus