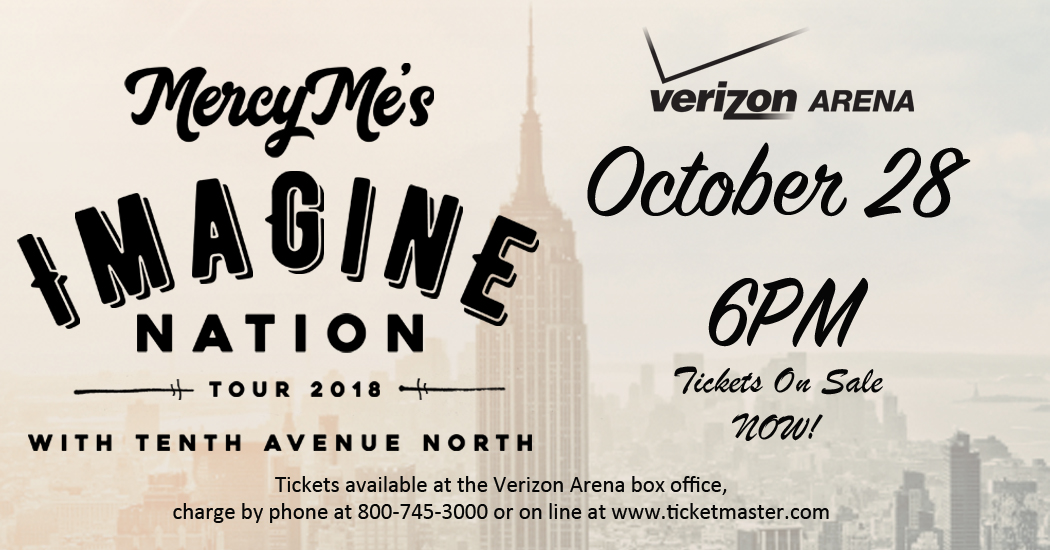 Groups of 15 or more recive a group discount! Contact Jeremy Flynn at 501-975-9131 or jflynn@verizonarena.com for more information.

5X GRAMMY ® nominated MercyMe’s “The Imagine Nation Tour” with longtime friends Tenth Avenue North will trek over 20 cities nationwide beginning in Oct. of 2018. Indianapolis, New Orleans, San Antonio and more are on the docket for the two-month run.

The award-winning groups will bring a bevy of fan-favorite songs. MercyMe promises performances of many of the favorites on their newest music release, I Can Only Imagine – The Very Best Of MercyMe, including “I Can Only Imagine,” “Greater” and “Shake” along with their most recent No. 1, “Even If.” Tenth Avenue North will share songs from their latest album Followers including “I Have This Hope” and “Control” along with the hits “By Your Side,” “Worn” and more.

"I Can Only Imagine" (Lionsgate, Roadside Attractions), a true story based on the life of MercyMe frontman Bart Millard who wrote the mega-hit song after the loss of his father to cancer, opened in theaters on Friday (Mar. 16). The highly anticipated film stars Dennis Quaid, Trace Adkins, J. Michael Finley, Madeline Carroll, Priscilla Shirer, Cloris Leachman and more.