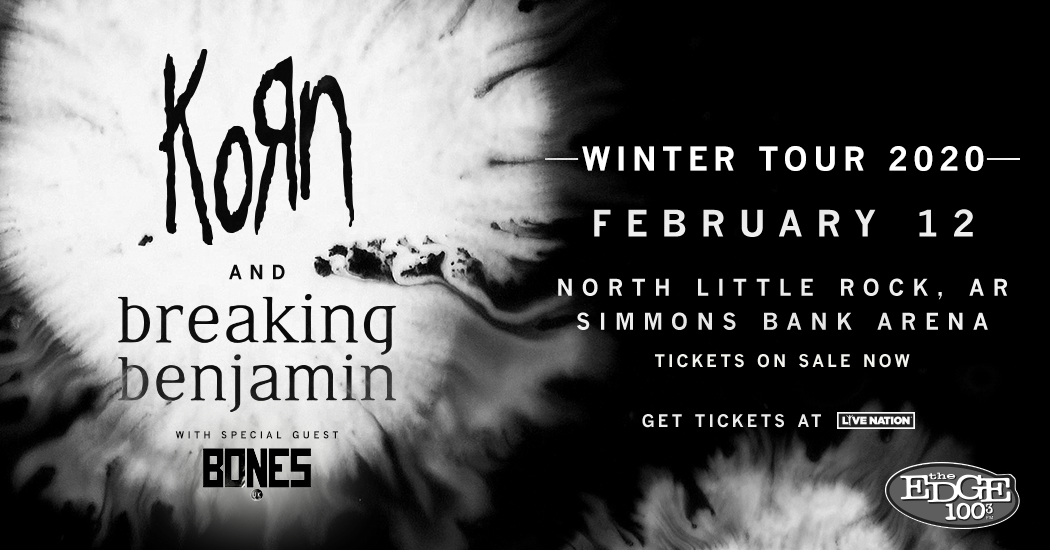 Grammy award-winning heavyweights Korn and multi-platinum hard rockers Breaking Benjamin today announced their epic tour set for 2020. Fans will have the chance to see two of the biggest forces in rock perform on the same stage each night across North America in the new year. Special guests BONES UK will also join the tour on all dates.

Tickets On Sale to General Public Starting Friday, 11/1 at www.ticketmaster.com or

Citi is the official presale credit card of the tour. As such, Citi cardmembers will have access to purchase presale tickets beginning Tuesday, October 29th at 10am local time until Thursday, October 31st at 10PM local time through Citi EntertainmentSM. For complete presale details visit www.citientertainment.com. Tickets go on sale to the general public beginning Friday, November 1st at 10am local time at LiveNation.com.

Earlier this year KORN shook the world with the release of their acclaimed new album THE NOTHING. The GRAMMY® Award-winning group’s latest effort is highlighted by singles “Can You HearMe,”Cold,”and“You’llNeverFindMe,”thelatterofwhichisjoinedbyanofficialmusicvideo. “It continues KORN’s mission of probing the hidden corners and harsh realities of life within a shroud discordant darkness,” declared Noisey with The FADER adding, “KORN have never shied away from innovation... the icons have always looked forward.” Los Angeles Times applauded the “...deep and potent performances from the band, evoking their ever-present rage but also feelings of loss and isolation,” while NME affirmed, “This urgent and important record will ensure the veterans don’t get lost in the shuffle.” Furthermore, KORN recently announced the imminent arrival of their groundbreaking dramatized anthology podcast series, ‘The Nothing,’ which was written and created by Adam Mason and Simon Boyes with KORN. ‘The Nothing,’ a six-part dramatized series, tells the story of journalist Matt Singer who travels to the small town of Wellden, Kansas to investigate the mysterious disappearance of a teenage girl. He soon discovers not everything is as it seems in the rural community, and finds himself heading into his own heart of darkness. Produced by Elizabeth Mason and directed by Adam Mason (Blood River, The Devil’s Chair), ‘The Nothing’ stars Keir O’Donnell (Wedding Crashers, Fargo, Legion), Darri Ingolfsson (Dexter, Black Antenna) and Mikayla S. Campbell. Fans can subscribe to ‘The Nothing’ NOW with additional details and airdates to be announced in the coming weeks.

BONES UK consists of vocalist Rosie Bones and guitarist Carmen Vandenberg. Their self-titled debut album is out now via Sumerian Records. The group confronts everything from the beauty industrial complex to toxic masculinity to music-scene sexism, embedding each track with choruses primed for passionate shouting-along. True to the L.A.-based band’s anti-conformist spirit, BONES UK unfolds with an entirely uncontainable sound, a riff-heavy collision of rock-and-roll and rough-edged electronic music. After recruiting Filippo (a former classmate of Carmen’s at The Academy of Contemporary Music in Surrey), BONES UK began pushing toward the heady complexity that now defines their music. Joined onstage by their drummer Heavy, BONES UK now see their live set as the ideal medium for their ever-expanding message, a vehicle for both catharsis and transformation.