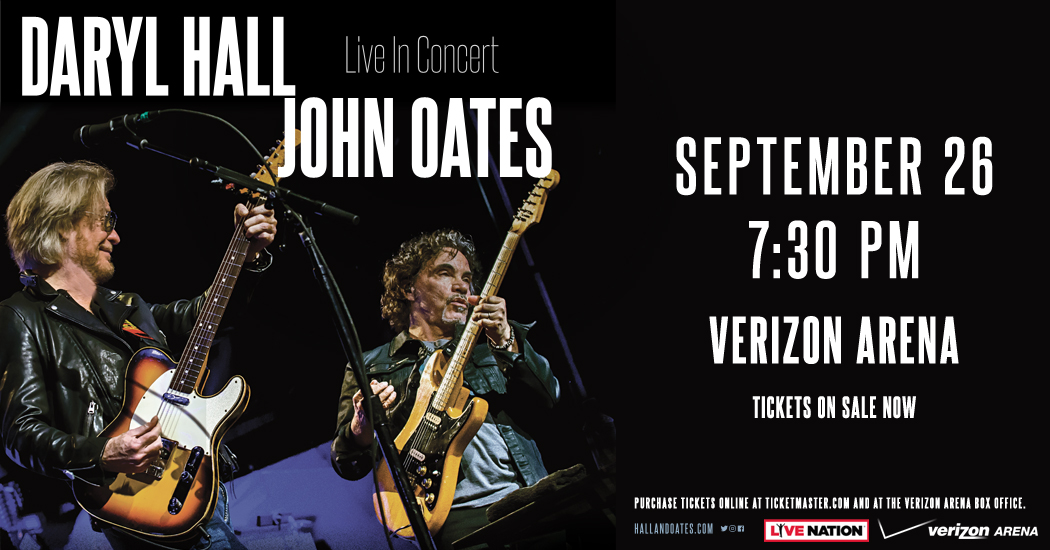 Daryl Hall and John Oates are the NUMBER-ONE SELLING DUO in music history!

Starting out as two devoted disciples of earlier soul greats, Daryl Hall & John Oates are soul survivors in their own right. They have become such musical influences on some of today’s popular artists that the September 2006 cover of Spin Magazine’s headline read: “Why Hall and Oates are the New Velvet Underground.” Their artistic fan base includes Rob Thomas, John Mayer, Brandon Flowers of the Killers, Ben Gibbard of Death Cab For Cutie and MTV’s newest hipsters Gym Class Heroes who dubbed their tour “Daryl Hall for President Tour 2007.” One of the most sampled artists today, their impact can be heard everywhere from boy band harmonies, to neo-soul to rap-rock fusion.

Signed to Atlantic by Ahmet Ertegun in the 1970’s, Daryl Hall & John Oates have sold more albums than any other duo in music history. Their 1973 debut album, Abandoned Luncheonette, produced by Arif Mardin, yielded the Top 10 single, “She’s Gone,” which also went to #1 on the R&B charts when it was covered by Taveras. The duo recorded one more album with Atlantic, War Babies, (produced by Todd Rundgren) before they left and promptly signed to RCA. Their tenure at RCA would catapult the duo to international superstardom.

Daryl also wrote the H&O single "Everytime You Go Away," which singer Paul Young scored a number-one hit with a cover of the song in 1985.

That same year, Daryl and John, participated in the historic “We Are the World” session as well as closing the Live Aid show in Philadelphia.

By 1987, the R.I.A.A. recognized Daryl Hall and John Oates as the NUMBER- ONE SELLING DUO in music history, a record they still hold today.

Daryl Hall’s latest project is a multi-award-winning monthly web series (and MTV Live show), Live from Daryl’s House (www.livefromdarylshouse.com). “It was a light bulb moment,” he says of the show’s genesis. “I’ve had this idea about just sitting on the porch or in my living room, playing music with my friends and putting it up on the Internet.” Live from Daryl’s House is also aired weekly on MTV Live every Thursday at 11pm EST/8pm PST.

In March 2014, Eagle Rock Entertainment released their first new concert video in seven years: Daryl Hall And John Oates: Live In Dublin on DVD+2CD, Blu-ray and Digital Formats. Filmed at the Olympia Theatre on July 15, 2014, this set features the duo’s first ever concert performance in Dublin. Daryl Hall and John Oates dipped into their 40+ year rich repertoire to deliver a setlist steeped in hits: “Sara Smile,” “I Can’t Go For That (No Can Do),” “Out Of Touch,” “Kiss On My List,” “Private Eyes,” “Rich Girl,” “Maneater,” and many more. It’s fitting that this high-energy 15-song concert film traverses songs from across their career, as Hall promises the audience that their “making up for lost time” in a city they’ve never performed in before.

John Oates released his memoir, Change Of Seasons (St. Martin’s Press) on March 28, 2017. Relying on his many handwritten journals, he brings to light many fascinating stories, ranging over his entire life, with a journalist’s eye and a poet’s heart. In Change of Seasons, Oates shares his highs, lows, triumphs, and failures. He takes the reader on a wild ride through all the eras, personalities, and music that have shaped him into who he is.