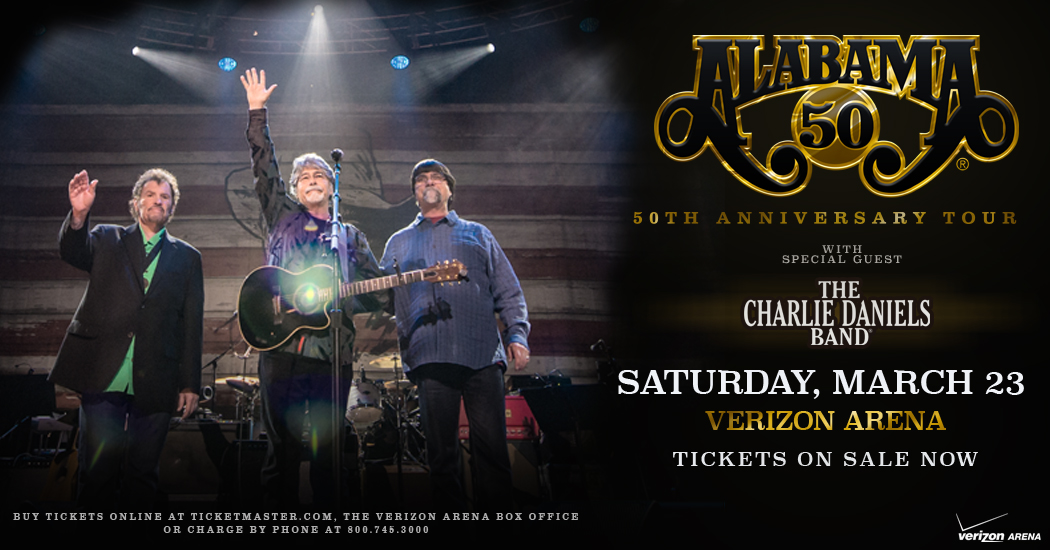 Alabama
It's been 50 years since Randy, Jeff and Teddy, left the cotton farms of Fort Payne, Alabama, to spend the summer playing music in a Myrtle Beach, South Carolina bar called The Bowery. It is a classic American tale of rags to riches. From humble beginnings picking cotton in the fields to international stars that went on to sell 80 million albums while changing the face and sound of country music.

Quality songs that have become the soundtrack for American life are the foundation for ALABAMA’s stellar career. Alabama introduced rock style guitars, lights, pyrotechnics and sounds to the country audience that has inspired many of today's brightest country stars including Kenny Chesney, Jason Aldean and Luke Bryan.

While their music continues to stand the test of time, their numbers and stats are beyond compare.  50 years since starting the band, Alabama has charted 43 #1 singles including 21 #1 singles in a row and have won over 179 CMA Awards, Grammy Awards, and ACM Awards. They are members of the Country Music Hall of Fame and have their own star of the Hollywood Walk of Fame. They are also world-class philanthropists who have raised over 250 Million dollars for charity. Celebrate 50 years of ALABAMA on their 50th Anniversary Tour coming to Verizon Arena Saturday, March 23rd.

From his Dove Award winning gospel albums to his genre-defining Southern rock anthems and his CMA Award-winning country hits, few artists have left a more indelible mark on America’s musical landscape than Charlie Daniels. An outspoken patriot, beloved mentor to young artists and still a road warrior at age 80, Charlie has parlayed his passion for music into a multi-platinum career and a platform to support the military, underprivileged children and others in need.

His own unique voice as an artist emerged as Charlie recorded his self-titled solo album in 1970 for Capitol Records. Two years later he formed the Charlie Daniels Band and the group scored its first hit with the top ten “Uneasy Rider.” Since then the CDB has populated radio with such memorable hits as “Long Haired Country Boy,” “The South’s Gonna Do It Again,” “In America,” “The Legend of Wooley Swamp” and of course, his signature song, “The Devil Went Down to Georgia,” which won a Grammy for Best Country Vocal Performance by a Duo or Group in 1979 as well as single of the year at the Country Music Association Awards.